…how long it’s been since I last had the time to put finger to keyboard – and what a lot has gone on during that time! I hasten to add all very much for the better.

As I write, I’m looking out at the raindrops trickling down the French doors that lead to the back garden, which is the size of an Olympic swimming pool and a dramatic upscaling from the postage stamp which served the same purpose in our previous existence. Our new garden takes hours to water, so the rain is a welcome visitor and more than welcome to the job. Quite unconnected from this observation, I suddenly recalled the cleansing nature of water, the so-called dipole nature of the stuff – something I had learnt eons ago in an Australian primary school. I have no idea why this thought should have suddenly surfaced! Perhaps it’s because, after far too many years on the treadmill masquerading as “life”, the peace and quiet of rural living allows the brain the space to recall such things.

Being a dedicated educator, despite the farce that has been allowed to develop in the UK education system, I had decided to work on beyond the official retirement age, before retirement and moving permanently to southern Ireland. Despite this, the day of my official retirement earlier this year was a welcome huge milestone in a life already marked by significant markers along the way. Those of you in a similar position will know how it feels to finally be rid of the micro-management, pointless policies, backstabbing and general incompetence which all too often is part of a hierarchical structure. This has all been replaced with the serenity of very pure, unpolluted air, bird calls and a silence that you can hear in the Irish countryside.

Panoramic view of the rear quarter acre. The barn needs a new roof, but the flowerbeds and raised vegetable beds (off to the left) have taken off – despite all the rocks in the soil! Most afternoons we have a herd of cows staring down at us from the top of the rise, safely behind the [electrified] fence.

Moving out of the city has given us the opportunity to become far more ecologically aware than before. We aim to become self-sufficient with vegetables and fruit and are also seriously thinking about beehives in our two orchards. A daunting target for a pair of rank amateurs, but so far we have been successful with our plantings in raised beds – lucky really, as we have never tried to grow vegetables before. Home grown really does taste very different from something that has been driven halfway across Europe to be delivered “fresh” to your supermarket! Mind you, we were incredibly inspired by an RTÉ TV1 programme called “Grow, Cook, Eat”, whose mantra is along the lines that anyone can grow anything with a little effort! We have the room – once we’d managed to clear the forest of brambles (the house and ground had been neglected for years) – and just got on with it. Meanwhile, almost 100 square miles of Mediterranean Spain is a gigantic hothouse of plastic sheeting churning out “cheap” vegetables for the European market produced largely with cheap migrant labour. The problem is that 100 square miles of plastic sheeting is going to be renewed and the old plastic abandoned to the waters of the Med. Will the European Parliament do anything to prevent this pollution? On the evidence of what has happened over past years, probably not. We now avoid as much plastic packaging as possible and think “too little, too late?” Probably, but we must all do something before we do ourselves out of our own planet. 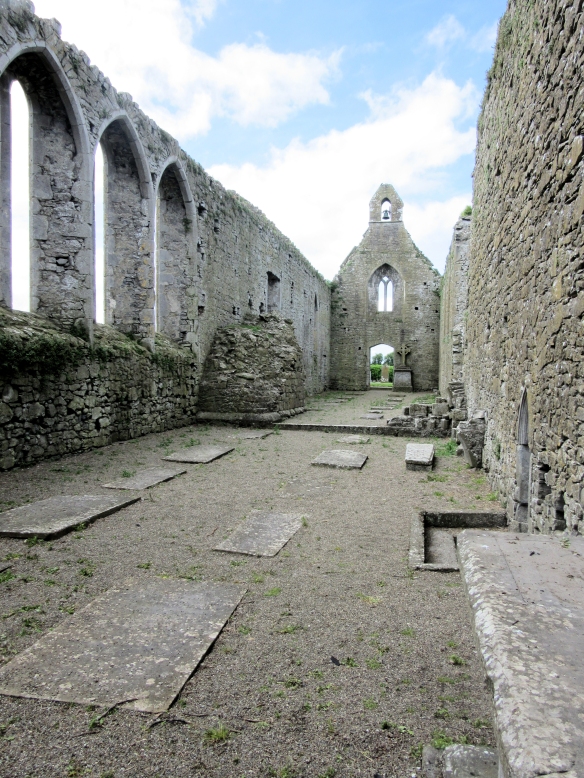 History lesson: Walter de Burgo, the Earl of Ulster and a Norman landowner, invited the Dominicans to his estate in Lorrha, County Tipperary in 1269. Our nearest village also boasts the remains of two other churches, two high crosses and a moat.

I am finding out more and more about Irish history, which is very convoluted and almost exclusively violent, to put it mildly. Much of it, I have to say, makes me quite ashamed to be English! Hey-ho. We live a couple of kilometres from the historic monastic village of Lorrha (1500 years of documented history!), we have a mass grave from the Great Famine over the hill behind us (we are near the highest point in north County Tipperary) and the foundation ruins of the habitations of those who suffered at the time. We belong to the local historic society and plan an expedition to investigate. All very sobering, but also interesting. Our nearby town of Portumna has the local workhouse from the time of the Great Famine, now preserved as a museum. One of the early callers for political reform in the Kingdom of Ireland was Henry Grattan (1746-1820). I had an uncle called Grattan, who was Canadian and often said he thought he was related. Possible, I suppose, as thousands emigrated to Canada during and after the Great Famine of 1846-54. Now there’s a nice winter project on one of those ancestry sites!

That’s all for now…

1 thought on “I can hardly believe…”

This site uses Akismet to reduce spam. Learn how your comment data is processed.